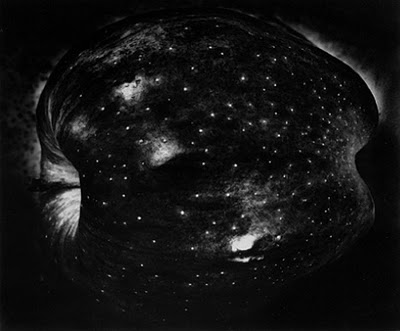 Robert Glenn Ketchum
“When I gave my presentation to the class I said, this is my favorite Caponigro picture. This photography, I think, is of the night sky. I like it because I’m not sure what it is, and that’s why I like it the most. Heinecken said to the class, ‘Does anybody know what this is?’ Three students called out immediately. Yeah, it’s an apple on a plate. Well as soon as they said it I saw it was an apple on a plate, but I was literally stunned into silence by this dual reality where I clearly perceived this as one thing and it was another. The only thing the artist had done was to photograph something from the real world. He extracted his vision from something that actually existed.”

“I was not only embarrassed but also stunned. It occurred to me that if you could make a straight photograph, unmanipulated, no fancy gimmicks, no tricks, of something you saw that had such a dual reality, that must be some kind of vision. Some fantastic way to perceive what we call reality and that set me off on a lifelong pursuit.”

Assignment
Photograph something from the “real world” in such a way that it becomes something else. Use the techniques we’ve discussed in class to inspire you. Try using macro settings, over/underexposure, extreme angles, etc. Do Not Use Photoshop to manipulate your images. This is about seeing the familiar in a new way.

“The real voyage of discovery consists not in seeking new landscapes but in having new eyes.” Marcel Proust