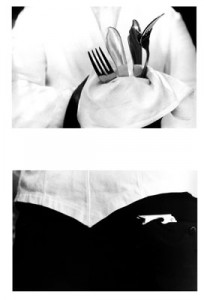 Gibson has maintained a lifelong fascination with books and book-making. Since the appearance in 1970 of THE SOMNAMBULIST, his work has been steadily impelled towards the printed page. He has produced over 40 monographs, and his photographs are included in over one hundred and fifty museum collections around the world, and have appeared in hundreds of exhibitions.

Visual Overtones reveals his personal thoughts about the role of his images on the page and how they converse with one another. In this book he advances his theory of “Visual Overtones: the enhanced impression experienced by the viewer is a result of the two images that produce it. With this in mind Gibson has sought out pairings of his photographs that conform to the rules of visual scale and photographic tonality. The diptychs are autonomous works delivered by the page of the book. In this manner, the viewer plays an important role in the function of the work, bringing to each diptych his or her own personal interpretation.