Here’s a great quote on art, science and photography from artist Adam Fuss.

“I was attracted to photography because it was technical, full of gadgets, and I was obsessed with science. But at some point around fifteen or sixteen, I had a sense that photography could provide a bridge from the world of science to the world of art, or image. Photography was a means of crossing into a new place I didn’t know.” – Adam Fuss

Widely known for his evocative and mysterious images Fuss uses the darkroom to create camera-less photograms that engage the “discovery of the unseen, the expression of the ephemeral and the universal themes of life and death”. 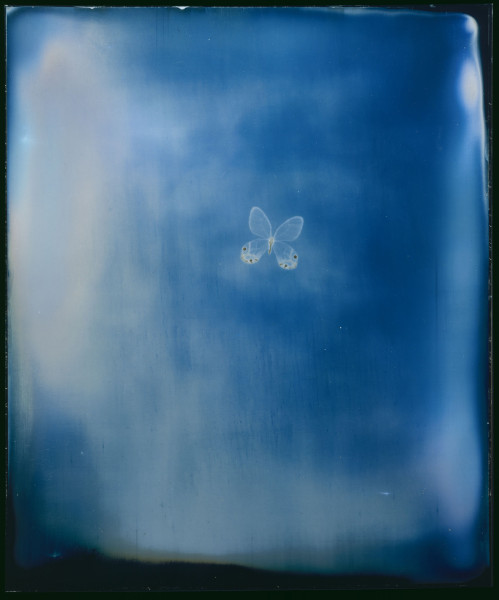 “The butterfly is a classic symbol of the brevity of life, its flight standing for the passage of the soul. It is captured here in an obsolescent technique, that of daguerreotype. Made on silvered copper plates, daguerreotypes were invented in the 1840s and used mainly for portraiture. Here the plate has been intentionally overexposed, producing a shimmering blue.” – Victoria & Albert Museum

For more insight into Adam Fuss’s ideas, creative process and photograms check out this short video produced as part of the exhibition Shadow Catchers: Camera-less Photography by the V&A Museum.

You may also want to check out these great books featuring the beautiful and mysterious photograms of Adam Fuss.