Quotes On Color, Form And Art From Vasily Kandinsky

“Color directly influences the soul. Color is the keyboard, the eyes are the hammers, the soul is the piano with many strings. The artist is the hand that plays, touching one key or another purposively, to cause vibrations in the soul.” – Vasily Kankdinsky 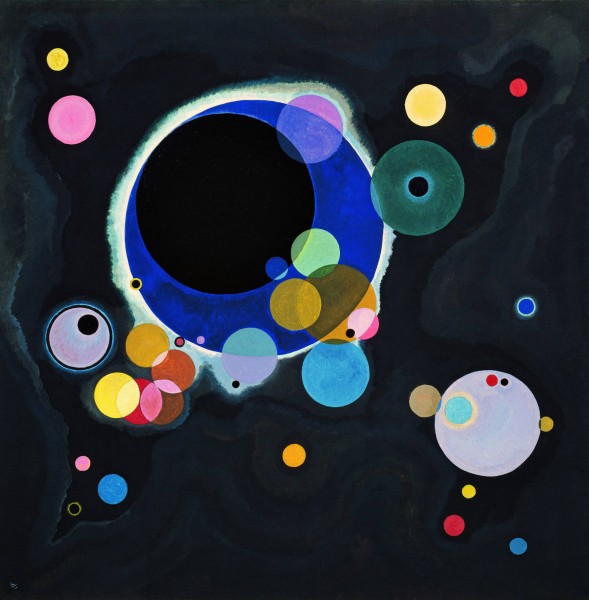 “In 1922 Kandinsky joined the faculty of the Weimar Bauhaus, where he discovered a more sympathetic environment in which to pursue his art. Originally premised on a Germanic, expressionistic approach to artmaking, the Bauhaus aesthetic came to reflect Constructivist concerns and styles, which by the mid-1920s had become international in scope. While there, Kandinsky furthered his investigations into the correspondence between colors and forms and their psychological and spiritual effects. In Composition 8, the colorful, interactive geometric forms create a pulsating surface that is alternately dynamic and calm, aggressive and quiet. The importance of circles in this painting prefigures the dominant role they would play in many subsequent works, culminating in his cosmic and harmonious image Several Circles.” – Nancy Spector, Guggenheim Museum

“The circle,” claimed Kandinsky, “is the synthesis of the greatest oppositions. It combines the concentric and the eccentric in a single form and in equilibrium. Of the three primary forms, it points most clearly to the fourth dimension.”

Here are some great books featuring work by Kandinsky from my Amazon store.

To learn more about Kandinsky and see more of his work visit the Guggenheim website here: https://www.guggenheim.org